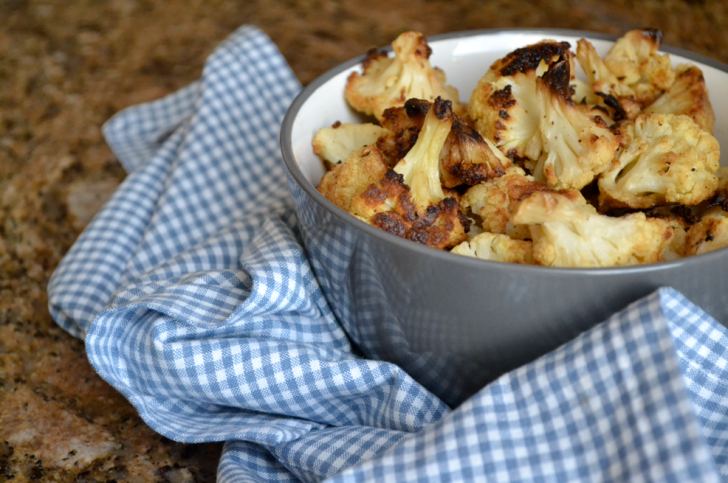 If you read my post a couple of weeks ago about my parent’s culinary capabilities (or lack thereof) you’ll know that during my formative years, cauliflower was eaten in one of two ways at my home:
i) Dad would (over)boil an entire head of cauliflower for close to two hours
ii) When Dad wasn’t in to boil the cauliflower, Mum would eat it raw from the fridge (remember she can’t even turn on the oven)
So it’s fair to say that, for good reason, I’ve always been less than enamoured with this knobbly white vegetable and I believe I’m not the only one who tends to overlook it as a viable side-dish option.
That is until Ottolenghi came on the scene.  With a plethora of delicious recipes he has managed to give cauliflower a much needed image overhaul and has consequently done wonders for its PR.
With cauliflower now in regular appearance at the SOTH-HQ I decided to try it out in a soup which elevates this humble vegetable into something particularly special.

METHOD:
Pre-heat your oven to 190° and line a large baking tray with parchment paper.  Douse your cauliflower florets in half of the olive oil and mix.  Spread the florets out on your baking tray.  I find that the trick with roasting vegetables is to make sure there is space around them; if they are too cramped they’ll steam instead of roast.  They’ll need around 20-25 minutes – you’ll know they’re reading when they develop a crispy darkened exterior like you can see in the first couple of images above.

Now, you really can stop right here if you like – these golden nuggets of deliciousness are so moorish that it’s all I can do not to demolish the whole lot at this first step.

If you actually want to make the soup, the next step is to use the remaining oil to fry off your onions and garlic, along with your freshly grated nutmeg, in a large saucepan.  They need around 10 minutes on a medium heat until they’re soft and translucent.

Dissolve the bouillon powder in the boiling water and pour into your saucepan.  Bring back to the boil and add the roasted cauliflower.  The soup can now be removed from the heat and pureed using a hand blender or liquidizer.  It’s really well worth blending the soup for quite a while to achieve a pleasingly silky consistency.

To find out how to make the pita croutons click here and refer to the S-O-T-H TIP.  Adorn your soup with a smattering of croutons, pomegranate seeds and a liberal sprinkling of za’atar.

S-O-T-H TIP: I have made this recipe with both fresh and frozen cauliflower and both work a treat.  If you’re considering making this soup in a large batch then the latter is really worth considering; it’s ready washed and far more economical.  You can roast the cauliflower straight from frozen.